Stop Asking for Time to “Pick My Brain”. It’s Insulting. 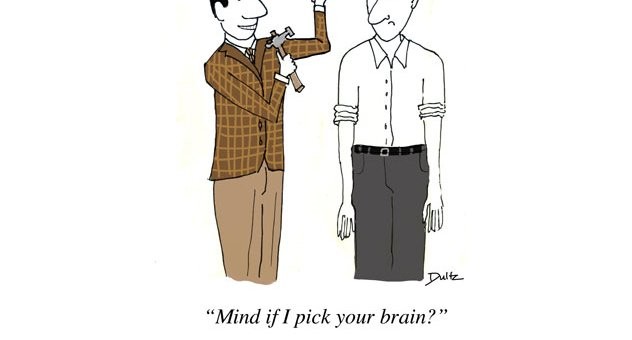 I’ll admit, in my 20s I was a repeat offender of “pick your brain” requests. But a colorful incident early in my career helped me realize the toxicity of such requests.

At a Silicon Alley networking event, I was introduced to the CFO of a medium-sized marketing company. Unsurprisingly, his attention was focused elsewhere and as his eyes scanned the room, I fruitlessly tried to engage him in conversation. Thinking quickly, I asked if it would be better to meet up for coffee at a later date so I could “pick his brain” uninterrupted. As the words crossed my lips, his attention sharply refocused. He proceeded to intensely demand why I was requesting his time, what I hoped to get out of it, and perhaps most importantly what benefit there was to him. Unable to verbalize a cogent answer, I was mercifully liberated from our conversation when he stomped away a few seconds later.

As jarring and unprofessional as the incident was, it was a deeply educational exchange and allowed me to appreciate the uneven power dynamics frequently found in early-stage professional relationships.

Before requesting time from someone of elevated status, I ask myself: What am I offering and what can the requested party gain from his time with me? I strive to find a way to succinctly communicate my value with the goal of mitigating the often uneven power dynamic.

And when I’m on the receiving end of a “pick your brain” request? I’d like to think I’m a bit more tactful than the above CFO, but the sentiment grounding our perspectives is the same. If you want to meet up, be specific – exploring a career change, want to discuss a particular topic, etc. Just don’t keep it open ended.